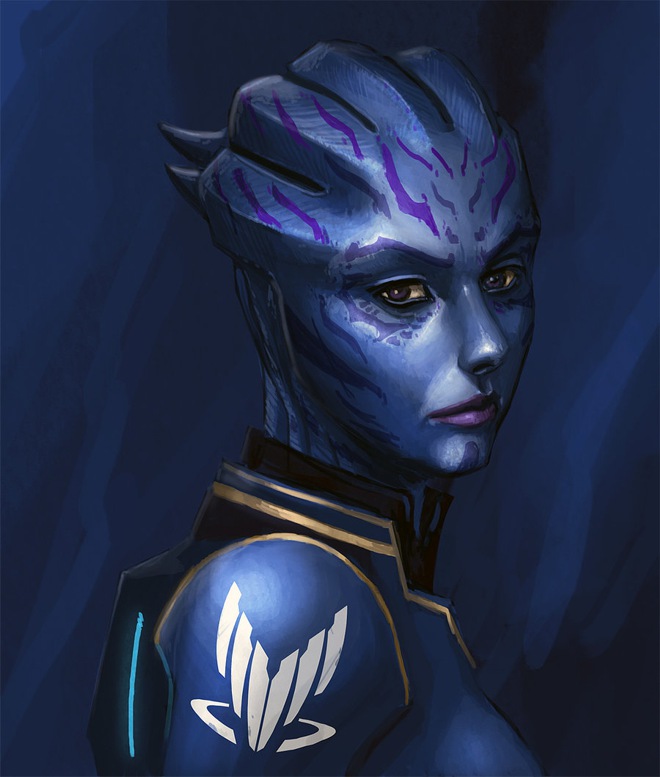 Physical Appearance:
| Biotics: 5 | Tech: 0] An Asari, standing around the height of 5'7 and weighing around 130lbs| She has facial markings that are slightly darker than her skin color |

When happy: Often shows a certain friendliness or care toward those around her.

When depressed: Often sits in the starboard observation room.

When angry: Often verbally lashes out at others.

Philosophy: Once you get attached to someone, you know you're fucked.

Sarah: "Sarah's another one of the crewman that I don't feel gets enough credit for her work. I'm not sure how long she's been with the crew; but I since she was there before I arrived just about five months ago, I'm surprised she isn't at least a Lieutenant by now."

Sveinung Olesen: "One of the more competent members of security. We've been through a lot these past few weeks; and I feel that he deserves more credit than he's getting from the rest of the crew."

Amara: "I've known Amara for a while now; I can't really give a specific time on how long, but I'd say a few months if I had to guess. We've been through quite a lot together within that span of time that I've known her; that's for sure. She's a Justicar like me, but I fear she still has much to learn when it comes to morality. She's too trusting with new arrivals."

Bodega: "Some crime boss or something from Omega. Oddly enough, he's more respectful than most of the Prometheus crew. Kind of had the feeling that he just wanted to get in my pants, but who knows. Might be rude of me to assume that... Anyway, I like him. Won't stop me from wasting him if it comes to that, and I think he knows that too."

Roro Shoek: "I know you'll probably hate me now if you return to the ship any time soon. If you're even alive still, that is. The fact that I wouldn't get a heads up toward your departures upset me, and the constant worrying started to effect my work. I don't blame you for doing your job, but I need to do mine. Regardless of your feelings toward me, I'll still pray to Arashu for your protection during your operations, and Kalahira in case you happen to pass."

Dr. Graves: "I feel like she'll be a wonderful addition to the medical team. Then again, I say that about every crewman that joins medical. Regardless, I'm sure she'll he helpful in one way or another. Now that I think about it, her last name is kind of ironic seeing how she's part of the medical team."


Ciri'Vaesa vas Zaaji: "The X-O of the medical staff aboard The Prometheus. Though we haven't spoken to each other very much since we worked on The Icarus together, I feel that I picked the perfect crewman for the job. When it comes to handling the medical bay, she's a blessing from Athame herself."

Phara Helix: "One of the medics aboard The Prometheus. She's proven herself among the division a few times. Despite the rumor I've heard about her fucking in the medical bay, I don't mind her. Not one bit."

Jakius: "I haven't talked to him that much, but he seems alright."

Phil Ackerson: "Phil is an amazing cook. Actually, that's an understatement. Phil is one of the greatest cooks that has ever blessed this crew."


Neutral:
Sloan Harken: "Haven't talked to him for very long, but he seemes alright from the time I got to."

Fielding: "I'm not sure what to think about him as of yet...I feel like I've met him before. I'll keep this updated as time goes on."

Thomas: "One of our newish crewman; some Marine veteran or something. Anyway, he's not that bad. Still, I haven't talked to him that much on account of my most recent injury. Might be a while."

Jason Murdock: "We haven't spoken to each other very much, but he's been popping in to keep me company while I'm under medical treatment. Guess that counts for something, right?"

Damien McCarthy: "I haven't talked to Damien that much; aside from when his mental evaluation happened, so I can't say that much on his behalf."

Oriya Yeik: "A female Drell that I met while I was on the Citadel. She's part of the crew, though I haven't seen her since the first time we met; so I can't say anything on her just yet."

Anatasia Baranovskaya: "She seems decent enough, though I haven't talked to her to the extent to where I could make a complete decision on where I stand with her."

Hariel: "Hariel's the kind of crewman that you think you know, but you keep finding out more and more as time goes on. I can't really tell where he stands with me as far as relations go, since we haven't spoke that much. He seems pretty nice, so far."

Grayson: "I never got to speak with Grayson that much when he was with the crew; but he seemed pretty cool when I got the chance to. I heard he's fighting the Reapers on Earth right now, so more power to him, I guess. Hopefully he makes it back in one piece; I've wanted to hear about how he got the title of 'The butcher of Torfan'."

Disliked:
Jameson: "No offense to him, but I don't like what I've seen or heard."

Gavius: "I respect what you do, but I don't like the way you lead. You almost seem xenophobic in some cases, even though most of the Turians within the crew are undisciplined shit heads in the end."

Respected:
Raik Proxx: "Proxx and I haven't had many conversations, so I can't really give my full opinion on him. He's a member of the security team, and he seems dedicated to his work."

Nick Floures: "Nick has a full plate to say the least. During training exercises, you can feel how hard he's trying; even if it doesn't work out the first or second time he commands the crew during these exercises, he still gives them more than one chance if they screw up. Keep doing what you're doing, bud."

Deius: "I haven't spoken to him much, though I respect his willingness to take a bullet for Asher when I was about to apprehend him. Loyalty is hard to come by."

Feared:
An'ari Loor: "There's a special place in my heart for my mother. Don't get me wrong, I love her. But, she's never been satisfied with anything that I've ever done. She's the thorn in my side. The shit in my punch bowl. There are times where I was tempted to kill her, but I know how that would end on my part; smeared against a wall from some biotic move that hasn't been used in the last eight hundred years or something."

Hated:
Davey Foster: "I hated L-D with a passion. Of course, I would never admit that verbally to him while he were in command since I knew her would just have me brigged. Foster got more of our crew put in body bags than he did acknowledging them. I don't know where he went, or if he's coming back; but if L-D takes up the Captain's position again, there's a good chance that I'll just fuck off before he charges us into a Reaper fleet."

Asher Abram: "Asher's pathetic. At one point, he seemed decent; but the fact that he feels the need to take medical supplies and then pull ownership over the supplies that the medical division needs because he 'pays for the supplies' and 'he's a higher rank' is fucking disgusting and selfish."

Deceased:
Fredericus Hohenzoller: "Ah, Fredericus...I'll admit that he was quite admirable. He didn't give himself enough credit for his actions and I felt that he misinterpreted how the crew spoke to him and commented on his actions. All in all, he was one of my favorite crewman out of the selection. I'm getting that plaque made that I promised once our next trip to the Citadel comes around, by the way. I hope your ancestors take it easy on you, bud."

Drain Nox: "I don't feel comfortable talking about what happened to him. He had so much potential that just went to waste. Guess you could say it all went down the drain."

Kaje: "I know we didn't exactly see eye to eye; but I don't blame you for anything you said or did while you were with the crew. At the time, I hated you, but now that you're gone I see that you tried to do what you did because you cared. Rest easy."

Boomy: "Boomhauer was awesome to say the least. The medical bay pretty much became his home since he ended up in it so much. Kinda miss hearing him ramble on about goddess knows what."

Cross: "I'm not even sure what to say at this point... I'll really fucking miss you, Boss Man."

Why you always say tbh just say your name you meme. Nick Floures.

It all started months ago.

I was part of a community called "WWC" where one guy always said TBH.

And I picked it up.

HexyFlexyMonGon said:
It all started months ago.

I was part of a community called "WWC" where one guy always said TBH.

And I picked it up.

"The Epitome of A Meme"