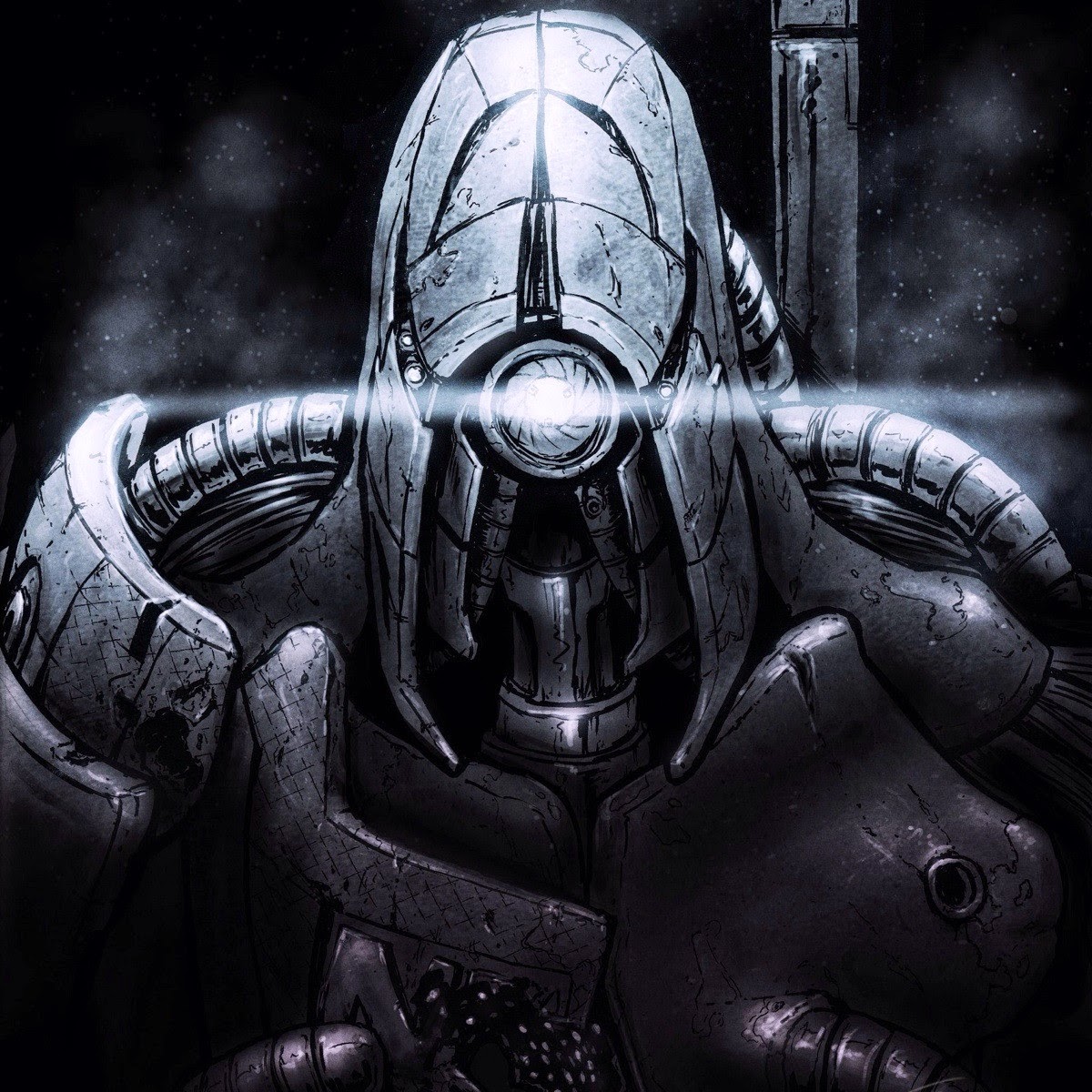 Style: (The overall style your character shows, not just limited to clothing. Ex: Punk, Goth, Nerd)
Mode of Dress: Black for casual, black for serious.
Grooming: So shiny you can see yourself in that armor.
Posture: Geth like.
Gait: A bit of a slow lumber, though speedy when needed.
Coordination: About as strong as any other Geth footman; High Shields but low Health, though their aim is KILLER.
Habits and Mannerisms: (Any nervous ticks or unconscious habits your character might have. Ex: Nail biting, crosses arms, or twirls hair)
Scent: A strangely pleasant metallic smell.

Mood: Neutral
Attitude: Logical
Stability: As stable as a Geth can be.
Expressiveness: All in the open.
When Happy: There will be a very soft whirring noise coming from them.
When Depressed: They will barley talk and either polish their weapon, polish their armor, or stand in their crate.
When Angry: *BLOOD-CURDLING MACHINE NOISES*, and then they go to their crate to analyze and process what the fuck just happened.
Note: These are generalizations. Different situations will create different reactions.

Current Residence: They're on a (space) boat.
Community: In harmony, as far as they can tell.
Family: N/A
Friends: N/A
Enemies: N/A
Bosses: Pretty much everyone.
Followers: The Captain.
Heroes: N/A
Rivals: N/A
Relates to: Any Geth
Love: N/A

Wardrobe: The armor attached to them. That's it.
Equipment: (Refers to tools or weapons your character may use. [Ex: A sword for a warrior]
Accessories: A barely noticeable tally near the top right shoulder. The tally so far is twenty-four.
Trinkets: (Applies to but not limited to good luck charms, purses, watches, or any other items they carry with them almost all the time.)
Funds: Exactly 0 all around.
Home: The Prometheus: His crate he arrived in.
Neighborhood: 'They are... Interesting, to be sure.'
Transportation: WALKING.
License Plate Number: N/A
Collections: They collect- FOUND OUT IC NEEEERD.
Most valuable possession: Their Rifle
Prized Possession: A very small piece of rubble from a Geth Ruin.

Occupation: Soldier for the Prometheus.
Work Ethnic: Depends. If the job at hand makes perfect sense, super well. If there is a more logical way to do something, they'll do it that way instead.
Rank: Started from the bottom and they're still there.
MOS: ???
Income: ???
Wealth Status: Not very.
Experience: Former Frontline during the Morning War
Organizations/Affiliations: New Quarian/Geth Allegiance: Kinda Rocky.

Main Goal: To assist in the longevity of the Prometheus crew.
Minor Goals/Ambitions:
Career: Soldier aboard the Prometheus
Desires: N/A
Wishlist: A shiny new Pulse Rifle, an upgrade for their synthetic armor, and to understand what a standard meal taste like.
Accomplishments: (Did they succeed in any goals?)
Greatest Achievement: Coming aboard the Prometheus.
Biggest Failure: (Self Explanatory)
Secrets: They very secretly want to know what a 'hug' feels like.
Regrets: The Morning War
Worries: (What do they worry about?)
Best Dream: Being accepted by all races.
Worst Nightmare: Being dismantled, one piece at a time.
Best Memories: Becoming a platform.
Worst Memories: Spending 100+ years barely active underneath a perpetual ton of rubble.

Strengths: Absolutely nothing pressures them. They are Geth.
Flaws: Will not hesitate to tell you if you're wrong, or if there's a better way to do something, far too snarky.
Perception: Black/White point of view.
Conflicts: A new weapon/upgrade, or
Instincts: Survive
Lures: Objects from Rannoch dating before the Morning War
Soft Spot: Shiny new 'toys'. (Weapons, hardware, ect.)
Cruel Streak: Explicit and purposeful harm to the platform.

Powers/Abilities: N/A
Origin: N/A
Source: N/A
Ability: N/A
Weaknesses: Strong electrical currents. It would cause great pain and possible short them out for a moment.
Immunities: Cannot get sick, does not need to eat, cannot feel pain.
Restrictions: N/A
Alternate Forms: Their optical will turn red, and if this happens: DO NOT STAND IN FRONT OF THEM.
Extra Anatomy: N/A

Languages: English, Geth
Accent: Mechanical
Speech Impediments: Occasionally, they'll have a stutter, like their lagging.
Greetings and Farewells: "Greetings." / "Farewell."
State of Mind: There are over a thousand programs in them. GUESS.
Compliment: 'We are glad you are not dead.'
Insult: "Searching for a fuck to give... We have found zero to give you. Apologies."
Expletive: *UNHOLY MECHANICAL SCREECHING*
Laughter: They don't LAUGH, but if they did it would be the most monotonous, robotic laugh there is.
Tag Line: 'We do not understand.'
Signature Quote: "We are MB-002 'Duodecim. We are pleased to make your acquaintance."